Adaptations for feeding are a conspicuous feature of avian evolution. These adaptations include modes of locomotion birds use while feeding, structure of the bill and the digestive system. Birds sit, walk, hop, fly and dive in search of food.

A bird’s bill is its key adaptation for feeding. The size, shape and strength of the bill affect a bird’s diet. Although seemingly specialised to one particular food or way of feeding, avian bills are multipurpose organs. Most birds feed on a variety of foods and may change diets with the season.
Three major features make up the general morphology of birds’ bills. The upper half of the bill, or maxilla, attaches to the brain case by a thin, flexible sheet of bone called the nasofrontal hinge. The lower jaw, or mandible, articulates with the quadrate (dentary bone), a large complex bone at the mandible’s posterior end. The large jaw muscles, which enable a bird to bite, attach to the posterior surfaces of the mandible.

The oral cavity houses taste buds, pressure receptors and a tongue that is often specialised. The tongue aids in the gathering and swallowing of food. Most birds’ tongues have rear-directed papillae that aid in swallowing. 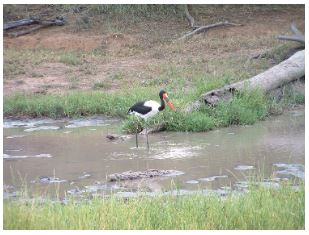 The following methods are applied in catching fish: 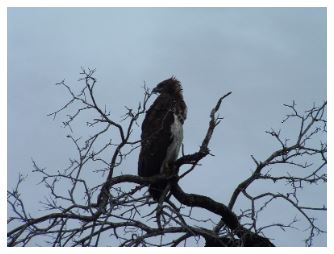 Meat is acquired by active predation or by scavenging. Active predators include the majority of birds of the order Falconiformis, most owls and members of the passerine families Laniidae (shrikes). Adaptation to a predatory lifestyle include the following:

Only the vultures and the Marabou Stork have specialised in scavenging to the almost total exclusion of other foraging methods. The “griffon” vultures are characterised by the possession of a deeply troughed tongue with serrated edges and a stronger supporting tongue-bone than those of the other vultures. 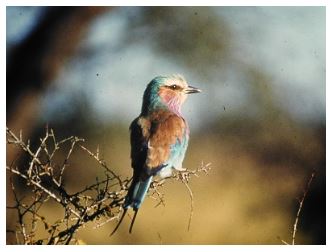 Feeding on insects include foraging from surfaces such as the ground, branches or leaves, crevices behind bark or between flower parts and foraging in the air. Adaptations in plovers, for example, include long legs for running after insects and well developed nasal glands to remove salt from the body fluids of their insect prey, which enables them to be independent of drinking water.

Adaptations to aerial foraging include the small bill with very wide gape, the long wings and the streamline body, often ending in a forked tail.

The salivary secretions of woodpeckers are sticky, which helps them extract insects from wood crevices and ants from nests.

The Giant Kingfisher and Water Dikkop are crab specialists, both having large, strong bills. Sunbirds are basically the only group that feeds to a significant extend on spiders. 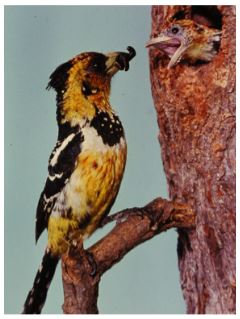 The most highly frugivorous of African birds are the louries, parrots, mousebirds, hornbills, barbets, orioles, bulbuls, starlings and white-eyes.

Frugivorous birds usually have robust bills for cutting through the tough skins of many kinds of fruits or for plucking them and swallowing them whole. Fruits favoured by frugivores are mostly black, red or orange in order of decreasing preference. Birds tend to avoid green fruits with few exceptions, e.g. the Yellowfronted Tinker Barbet that feeds on the green fruit of the mistletoe(Tapinanthus and Viscum). 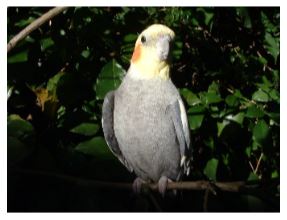 Seeds are processed in the following two ways among birds: 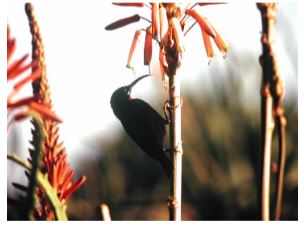 Feeding adaptations among nectar-feeding birds include a tubular tongue for nectar extraction, a distensible oesophageal pouch (crop) for nectar storage and juxtaposition of the entrance to the digestive area (proventriculus) and the opening into the intestine. This anatomical arrangement allows nectar to bypass the stomach, while diverting insect food into the stomach for longer digestion. The gizzards of nectar-feeding birds are thin-walled structures. The tongues of sunbirds a brush-like tip with which nectar is licked up.

Straining fine particles out of water has been evolved by at least three living groups of birds, namely the ducks, flamingos and prions. The adaptations to bill structure should be studied in each of these groups. 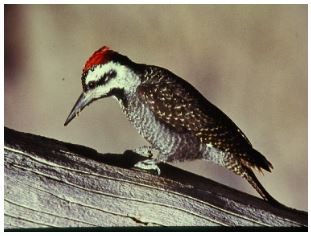 Tits, barbets and woodpeckers are among the most specialised birds that use woodpecking as a means of extracting food from wood. In these birds and especially the woodpeckers the following adaptations are noticeable: