Call of the Cicada

We are all too familiar with that loud, incessant and sometimes deafening drone of the cicadas pulsing through the air during the warm summer months. As a matter of fact the sound is so persistent that people tend to ignore and sometimes become completely oblivious to it.

Here in South Africa some people refer to the culprits as Christmas beetles, which is a bit of a misnomer as they are not beetles but bugs belonging to the same group of insects as aphids, leafhoppers and spittlebugs. They are also around during most part of summer. In Australia the various species of cicadas have very descriptive and colourful names, for example Black Prince, Green Grocer and Double Drummer to mention but a few. Worldwide there are between two thousand and three thousand different species. 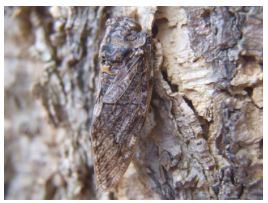 Most of a cicada’s lifecycle is spend underground where they live as nymphs feeding on the juices from tree roots by inserting their sucking mouthparts into the roots. Here they may spend years and go through several instars (developmental stages) and moults before finally emerging to go through a final moult outside on the trunk of a tree. 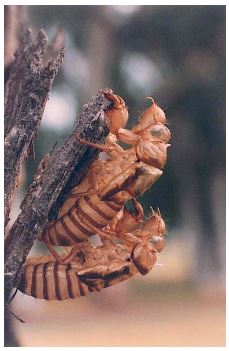 The carapace splits open lengthwise along the dorsal (top) side of the nymph to allow the new cicada into the outside world. It takes a while for the carapace and wings to harden before the cicada is ready for its adult life lasting but a few weeks. After mating, the female cuts slits into the bark of a twig and deposits her eggs there. When the eggs hatch after about six weeks, the newborn nymphs drop to the ground, where they burrow and start another cycle. Most cicadas go through a life cycle that lasts from two to five years, although some American species have a life cycle of seventeen years.

The intriguing question is how do these small insects produce that deafening sound and for what purpose? Well, the interesting thing about these noisy bugs is that only the males are calling. The reason? Well, to attract females of course. Each species has its own distinctive call and only attracts females of its own kind even though rather similar species may co-exist. The apparatus used by cicadas for producing the sound is quite complex and differ completely from insects such as crickets and grasshoppers in which sound is produced by means of stridulation, when different body parts are rubbed together.

The sex of a cicada is easily determined by looking at the underside of the insect. In females there is a pointed egg-laying organ (ovipositor) at the tip of the abdomen, which is absent in males. Instead, males have two semicircular plates, called opercula, which are situated at the base of the abdomen at its junction with the thorax and just behind the last pair of legs. The opercula cover the sound-producing and hearing organs. By lifting one of the opercula the tympanic membrane, used for hearing, can be seen as a whitish plate at the back of the cavity. The sound-producing organs, which are called tymbals, are situated at the side of the cavity behind the opercula. The hearing organs or tympanums are present in females but they lack the opercula and sound-producing organs. 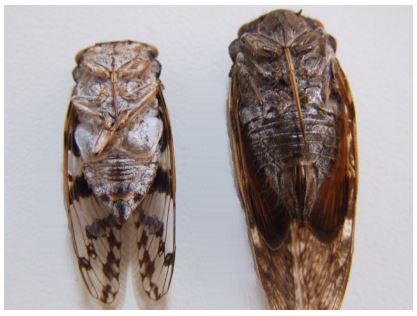 The tymbals are ribbed membranes, each having strong muscles attached to it. Contracting and relaxing these internal tymbal muscles causes the tymbals to rapidly vibrate and produce pulses of sound. In some cicada species, a pulse of sound is produced as each rib buckles. The sound so produced is further amplified by the almost hollow abdomen and enlarged chambers derived from the tracheae (tubes conducting air to the internal tissues of an insect), which serves as a resonance chamber. The male can change the volume of the sound by lifting or lowering the opercula. This also gives the sound a ventriloquial quality making it difficult for human listeners to pinpoint the origin of the sound. 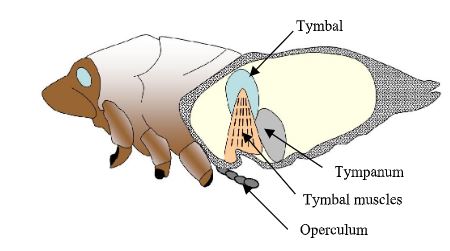 The most fascinating thing is that a certain group of African cicadas are among a very few insects that are capable of thermoregulating endothermically, in other words, they regulate their body temperature by means of their own internal cellular metabolism. Ectothermic organisms on the other hand, have to rely on external sources to regulate their body temperature. There are many advantages to endothermy, the most important being the ability of the males to control the quality of their calls as this is important to attract females. Endothermic males can much better regulate the temperature of their singing muscles, thus making their call characteristics much less variable and allow them to compete more effectively for mates.