Many insects such as locusts, bugs, beetles, moths, butterflies and bees produce toxic or unpleasant substances that are either secreted by special glands or that are contained in the blood, stomach or other parts of theses insects’ bodies. Certain beetles are renowned for their ability to produce toxic substances. Two such groups of beetles, namely the net-winged beetles and leaf beetles are quite toxic and in the case of the flea-beetle, even potent. 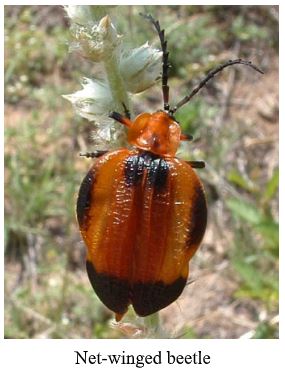 Net-winged beetles or flat beetles (Lycus spp.) are all poisonous and therefore display aposematic colouration in combinations of orange and black patterns, which is mimicked by certain long-horn beetles and moths. The longitudinal ridges on the wings are characteristic of the net-winged beetles. They are slow flying insects that are very common on flower inflorescences and flower heads during the summer months. The larvae are predatory on other insects and look very similar to the larvae of the glow worms or fire flies. Eggs are laid under bark and in rotten wood, where the eggs will hatch and the larvae start feeding on other insects.

The most famous of these beetles are the arrow-poison beetles or flea beetles, the larvae of which are used by the san or Bushmen to poison their arrows. The most commonly used arrow poison is derived from the larva and pupae of beetles of the genusDiamphidia and Polyclada. Diamphidia is about 12 mm long, yellowish with small black dots. The antennae are unusually long for such a small insect. The young stages are yellow-brown and hairy with black heads. Older stages turn grey with black lines or series of black dots across the body. The head is black. There are no hairs on older larvae. 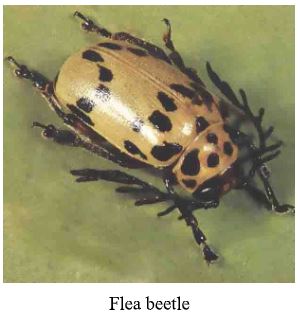 The poison is applied to the arrow either by squeezing the contents of the larva directly onto the gut-binding between the shaft and the arrow head, by mixing it with plant saps to act as an adhesive, or by mixing a powder made from the dried larva with plant juices and applying that to the arrow tip. Interestingly the toxin, from these beetle larvae and pupae, called diamphotoxin, is non-toxic to mammals by ingestion and is only toxic after it enters the blood stream. Diamphotoxin is chemically unique, causing severe and extensive haemolysis, which is the destruction of the red blood cells with a subsequent release of hemoglobin the protein in the blood that carries oxygen from the lungs to the rest of the body