Those “pesty” little things that play havoc in my garden and house and that should be exterminated at all costs? No,hang on! Not so fast with the extermination idea! Well, at least not in the natural environment. These little creatures are the pantries, excavators, cleaners, decomposers and fertilizers of nature and deserve a bit more respect, attention and admiration.

So, what are termites then? For a start, we know that they are insects. Some people refer to them as “flying ants” or “rysmiere” and Eugenè Marais, famous author and naturalist, even referred to them as “white ants”. Fact of the matter is that they are not even remotely related to ants and are evolutionary speaking, closer to cockroaches. Structurally they differ from ants in not having a “waist” between the abdomen (hind body) and thorax (breast). They also have straight antennae (feelers) and not the knee-like bend antennae of ants. Unlike ants, termites have a life-cycle which does not include a pupa stage. This is described as incomplete metamorphosis (hemimetabolic development) compared to the complete metamorphosis (holometabolic development) of ants. Just like ants though, termites are social insects that cannot exist and function as individuals. 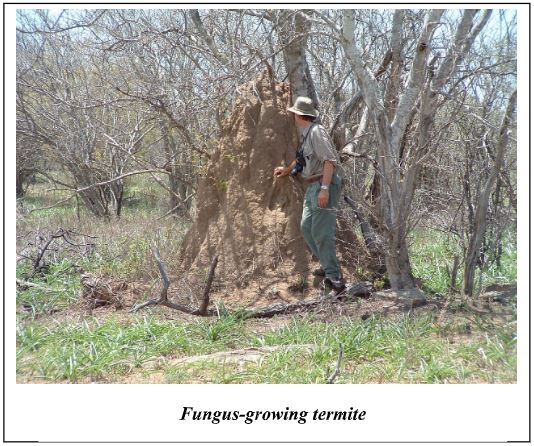 Well, so much for the technical detail. Termites are considered a very ancient and primitive group of insects, which existed in their present form for more than a hundred million years. They are all herbivorous, eating wood or other dead or green plant material. Except for a few, most termite species do not possess the enzymes to digest the cellulose in plant cell walls. In order to obtain the energy stored in these chemical compounds they have to rely on other micro-organisms to do it for them. For this purpose some like the harvester termites (Hodotermes spp.) lodge microscopic unicellular organisms called flagellates, in their intestines. Others (Macrotermes and Odontotermes spp.) make use of a fungus that they cultivate to perform this function outside their bodies. It is these fungus-growing termites that are responsible for the so familiar structures that are erroneously called “ant-hills”, but which are in actual fact termitariums or termite mounds.

In the natural world a termitarium is without a doubt one of the most remarkable wonders of nature and in structure and function exceeds any of the so-called technologically advanced engineering endeavors of the human race. They have been referred to as “castles of clay” and indeed that is what they are with king and queen, workers and soldiers, all performing a specific function in maintaining this encapsulated society. The most intriguing thing is that all happens in complete darkness. A termitarium is designed in such a way as to create just the right micro-climate and conditions for the comfort and well-being of the termites and for the fungal gardens that they grow and maintain. The fungus serves not only as a food source, but also as an air conditioning unit that regulates the temperature and humidity inside the termitarium. It generates heat as it grows and absorbs surplus moisture, which is released back into the air when the humidity inside the nest falls below a certain level. Termites can tunnel as deep as fifty meters to find the water that is necessary for maintaining the atmosphere inside their nests.

With all their excavations and construction activities the termites continuously bring nutrients up from deeper down so that the soil in and around the termitariums becomes quite fertile. This is eminent from the variety of tree species that grow on these old termitariums. Termitariums are often covered with blue buffalo grass (Cenchrus ciliaris) which is a good indicator of fertile soils. In places like Pilanesberg for example, the fungus growing termites prefer areas underlain by “ou klip” The mound of a fungus-growing termite (ferricrete), which forms an impermeable layer just under the soil surface where water accumulates in depressions making it more accessible to the termites for collection and transportation back into their nests. 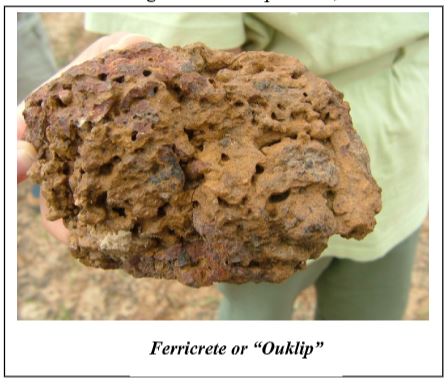 Over many years the continuous activity of termites collecting coarser soil particles, minerals and water from deeper down and transporting it to the surface, a process known as “bioturbation”, has effectively contributed in forming a clay rich layer over the ferricrete. This process contributes in dismantling the hard impervious layer of “ou klip” under the termite mound, forming a so-called “soft spot” with deeper soils allowing trees and shrubs to thrive on these areas. This has created the so familiar tree patches associated with the termite mounds that can be seen all over the Bushveld landscape.

Termites and their termitariums play a significant role in the ecology of natural ecosystems. Their main contribution to the ecology of this beautiful reserve is as a source of food. Many insectivorous birds feast on the termites that also form the main diet of the large, black Matabele ants and mammals such as aardvark and aardwolf. In the dry season the sweeter grass that grows on these termitariums are eagerly sought after by grazing animals in need of nutritious forage. Red hartebeests and tsessebe often use the termite mounds as lookout posts and central points in their territories. It is home to a myriad other organisms, ranging from invertebrates to reptiles and mammals. Water monitor lizards lay their eggs in the termitariums where they become safely sealed off and develop at an almost constant temperature and humidity. The ideal incubator! Predators, especially cheetah, often climb up on them as a vantage point to spot potential prey. Elephants and rhinos use the termite mounds as rubbing posts, sometimes completely demolishing them, and in so doing return the concentrated nutrients to the soil.

Although these little insects are generally not visible, their mounds certainly advertise their presence. So, next time you drive past one of these wonders of nature, consider the fact that our natural world probably would have had a completely different ecology and landscape if it weren’t for these little insects.